Staunch in Jam with Words

In February this year, we interviewed Bridget Lawless on the new Staunch Prize. The shortlist is out now! Congrats to all the authors and we look forward to reading your work. 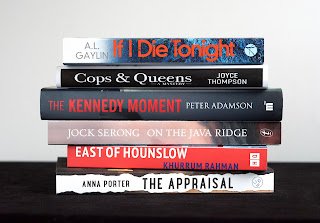 The Staunch Book Prize team are delighted to announce that the six original novels shortlisted for the inaugural award are, in no particular order:
To qualify for the shortlist, entries to the Staunch Book Prize had to fulfill the criteria of being a thriller novel in which no woman is beaten, stalked, sexually exploited, raped or murdered.

The Prize was launched in response to the prevalence of violence against women depicted in fiction and the need for this subject to be taken more seriously, especially in the wake of #MeToo.

In an impassioned speech at Variety’s Power of Women event earlier this month, Natalie Portman called for “A year off from violence against women”, challenging her audience to “Tell a new story”.

Bridget Lawless, writer and founder of the Staunch Book Prize, says,
“In a climate where women are fighting to be heard and believed about real incidents of violence and sexual assault, more and more people are saying they are weary of depictions of women as victims and prey being presented as entertainment. The quality and originality of the entries we have received for the inaugural Staunch Book Prize has shown that there are some very talented thriller authors ready to shake up the genre. We can’t wait to introduce audiences to our six shortlisted novels.” The Staunch Book Prize has received worldwide media coverage due to its timely and somewhat controversial theme. Despite criticism from some members of the crime writing community, the prize has been warmly welcomed by supporters, including readers, writers and those campaigning for an end to violence against women.

The winner will be announced on Monday 26th November, following the International Day for the Elimination of Violence Against Women.

Author biographies and interviews, plus an extract of each shortlisted novel, can be found on the Shortlist page of the prize website from Thursday 1st November.