Jock Serong is the first to receive an International award for his lack of violence.

The Port Fairy author was awarded the inaugural Staunch Book Prize last week for his novel On the Java Ridge.

The UK-based prize is awarded to the author of a novel in the thriller genre in which no woman is beaten, stalked, sexually exploited, raped or murdered. 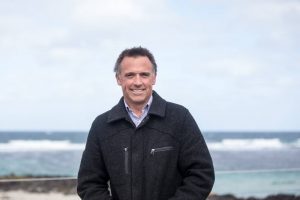 Entries were received over five months from across the globe. Published and unpublished writers of thrillers were invited to submit their work.

On the Java Ridge, Serong’s third novel, was published in 2017.

Told primarily through the eyes of a nine year-old, the book is about a group of Australian surfers on a luxury trip out of Indonesia who inadvertently become involved in the attempted rescue of a boat load of refugees.

Staunch Book Prize judges said Serong’s “knowledge of the sea, weather, boats and Australia’s political disdain for modern day immigrants is described with fierce anger and deep compassion. Violent and explicit in places, there is nothing gratuitous here whatsoever.”

The Staunch Book Prize, founded by screenwriter Bridget Lawless in January 2018, celebrates thrillers in which no woman endures violence.

Serong took home $3550 and a glass trophy for his win.